Xuan Thuy National Park - The first Ramsar Area of Vietnam - The main core of Red river biosphere reserve
Planning of protected areas for wetland systems   (10:20 | 12-05-2011)
ThienNhien.net – On the 13th October 2008 the Prime Minister published the decision 1479/QD-TTg approving the planning of new areas for the protection of wetlands until the year 2020.

According to the decision the new plans for a system of protected wetland areas concern the period until 2020 and must conform to the strategic development plans for the fishery sector and the overall planning for the fishery until the year 2010.

The investigation, scientific research on fishery resources and the diversity of the aquatic ecosystem have to take a step forward, the implementation has priority in wetlands with rare species, a valuable economic and scientific contribution and the possible risk of extinct species.
The conservation of wetlands should be seen as an urgent task on a long term being responsible for the security of our society. There must also be policies, measures and international cooperation to respect the importance of conservation, control the level of exploitation of natural resources and make the fishery sector sustainable. This way the diversity of the wetlands ecosystems can be protected.

Gradually, a system of protected areas to protect, restore and regenerate fishery resources (especially those concerning rare species and the ones with a high economic and scientific value) will be created, this way protecting the aquatic ecosystems. Local communities will be encouraged to participate in the management to guarantee a reasonable level of exploitation which is the basis for ecological balance and the preservation of a high biodiversity in wetland systems.

During the period from 2008-2010 the planning system for the protection of wetlands will be finished. The establishment and begin of operations is planned for five areas including the Red River Delta, the Mekong River Delta and the central highlands.

During the period from 2011-2015 the establishment and start of operation is planned for 25 wetland areas including one national conservation area.

During the period of 2016-2020 the setting up and launch of the last 15 conservation areas will be realized. The implementation of all wetland conservation zones will be completed. 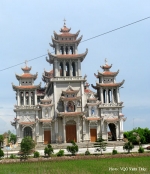