Xuan Thuy National Park has been struggling with rising sea levels, which have been attributed to climate change.
Last year, 8ha of casuarina forest was flooded by sea water, which caused losses estimated at over VND400 million (US$21,000).

The 7,100ha forested wetlands in Nam Dinh Province, about 150km south of Ha Noi, are home to a wide range of migratory waterfowl and other species. It is as a Ramsar Convention site – a wetland area recognised internationally for its ecological importance. The only such site in Southeast Asia.

"We are aware of the problem that has been getting worse over the last two years. Last year we were forced to replant 6ha of casuarina trees," said Nguyen Viet Cach, the park director.

"However, we are seeking bigger and higher plants from the south to replace current mangrove forest, which will be devastated in one or two years," Cach said.

Mangrove trees are abundant on the 7,100ha wetland park, which affords it some protection against storms and floods – but there numbers are also decreasing.

Hundreds of shrimp and oyster farmers in the park face losing their incomes.

As a result of rising sea levels, dams need to be built and roads raised by between 15cm and 20cm park officials said.

Doan Van Trieu, who farms a 16ha part of the farm, said he had seen his income dwindle over the last few years.

"I earned VND100 million ($5,200) this year from my farm, just half what it used to generate in previous years. Aquaculture is very vulnerable to rising sea levels," Trieu said.

He added that he farmed just one tonne of prawns this year – the worst for five years.

"Shrimp breeding, which is easily affected by polluted water, has been badly impacted by sewage from villages around the park. Chemicals have grown increasingly popular over the last two decades," the 44-year-old farmer said.

Trieu, who is from Giao An Village, said he had to fork out VND20 million ($1,000) a year on building embankments against rising water levels.

Managers of the park, which is recognised by UNESCO as a Red River Biosphere Reserve, plan to plant new trees such as avicenniaceae and cypress on an 80ha area at a cost of around VND128 billion ($6.7 million) over a three- to five-year period.

The park’s wildlife, which include as estimated 215 bird species – such as black-faced spoonbills, western white pelicans, black-headed gulls and redheaded egrets – are listed as endangered.

However, the number of bird species has declined over recent years, a fact attributed to global warming.

Park staff Vu Xuan Anh said there were still about 50 black-faced spoonbills visiting the park in winter but that many other species were dwindling in number. — VNS
by Cong Thanh
Nguon: Vietnamnews 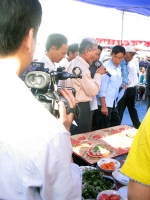