Xuan Thuy National Park - The first Ramsar Area of Vietnam - The main core of Red river biosphere reserve
Small opinion – Big success   (09:49 | 16-03-2018)
With a community-based management approach and encouraging their participation into the process of preservation and development, Xuan Thuy National Park (XTNP) has obtained important achievements in the sustainable management of wetlands resources of the region. The opinions of the community are always listened and addressed. One of them is about management issue in the mangrove forest and the resources under the forest canopy in the park’s buffer zone.

Mangrove ecosystem in the buffer zone plays an important role in being a shelter to protect residential areas from storms, providing foods for thousands of people, being the feeding and living places for many aquatic species, and thus maintaining the ecological balance of the wetlands. Moreover, aquatic creatures such as crab, shrimp, oyster, and gull in the mangrove forests also bring high incomes for the local community.

However, according to Ms. Tran Thi Xuyen (Hamlet 8 – Giao An commune), there is no mechanism to monitor aquatic resource harvesting activities in the protective mangroves, productive mangroves and even protected area. The community does not receive institutional supports, which in turn leads to limited awareness  about the mangrove forests’ roles. Consequently, they exploit the mangroves and resources within the mangroves improperly and unsustainably.

In deed, there is an overlap in forest management among the authorities including XTNP, Forest Ranger, and Commune People’s Committee. . Meanwhile, the prevailing regulations have failed to guide the local authorities to properly address the forest management and protection issues. Those regulations also cannot help set up a mechanism for interest and responsibility sharing among relevant stakeholders. As a consequence, no stakeholder takes specific responsibilities and practical actions on the ground to protect the mangroves, which therefore  become exhausted due to the excessive exploitation.

To address the problem, has developed a project to request for financial and technical supports from the Wetlands Alliance Program. At the first stage, the project will focus on allotting the local community to utilize and protect the mangrove resources in Giao An commune. Accordingly, the park together with the community will build regulations, and a core team for protecting the mangrove resources, which obviously will facilitate local livelihoods while attaching people to the forest conservation. An operating and supervising mechanism will also be discussed and approved by all the parties (XTNP, Giao An council, and resource user groups).

The project was launched in early 2010 by conducting socio-economic survey, field work, and local dialogues. The pilot in Giao An commune once succeeded  will be expanded to the other mangrove areas in five communes of the buffer zone. The project  is believed to create a new direction in wisely using the mangrove resources, sharing interests and responsibilities with the communities, and thus turning risks into opportunities for sustainable mangrove forest preservation.

A small opinion of the local has  initiated many actions to  protect  mangrove forests and aquatic resources: This helps sustainable preservation and development of the Red River delta Biosphere Reserve area, and the first RAMSAR site in the Southeast Asia region./. 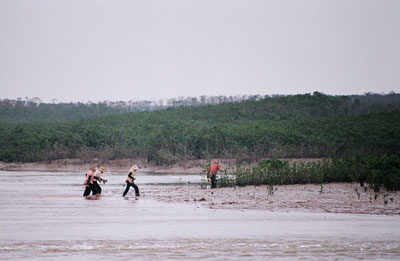 Local people are harvesting resources in